Originally from Texas, Executive Chef Austin Simmons took to the toque at the tender age of eight. As a child growing up in Arlington, Texas, he bonded with his mother while they made dinner together after she arrived home from her first job of the day and before departing for her second.

Upon high school graduation, Simmons immediately pursued a culinary degree attending Le Cordon Bleu College of Culinary Arts in Austin. After graduating, he moved to Dallas in hopes of working at the famed Mansion on Turtle Creek. Turned away almost daily over the course of several weeks due to his lack of restaurant experience, his persistence finally paid off, and he was offered an internship.

It was there that Simmons found a reverence for fine dining and respect for the skills and success of master chefs. Simmons worked the chef’s table at The Mansion for three and a half years, first honing his craft under James Beard award-winning Chef Dean Fearing, and later, John Tesar.

In 2009, after his stint at The Mansion, working at BlackFinn in Dallas provided an insight into casual dining scene for Simmons. With a desire to return to fine dining, Simmons left Dallas for The Woodlands to assist Chef John Tesar to open his eponymous restaurant, Tesar’s Modern Steak & Seafood. Upon Chef Tesar’s departure from the restaurant, Simmons caught a once-in-a-lifetime break, and with the support of the ownership, management, and customers, all of whom he had built strong relationships with, jumped on the opportunity to lead and redirect the kitchen in their newfound positions.

In 2010, following the closing of Tesar’s, Simmons was quickly invited to join the culinary team at the newly opened Hubbell & Hudson Market & Bistro, whereby 2012 he was promoted to executive chef. Adamant in wanting to tell a story through his cooking, Simmons is very simplistic in delivery using light, but flavorful ingredients that allow the natural flavors of the food to express themselves. 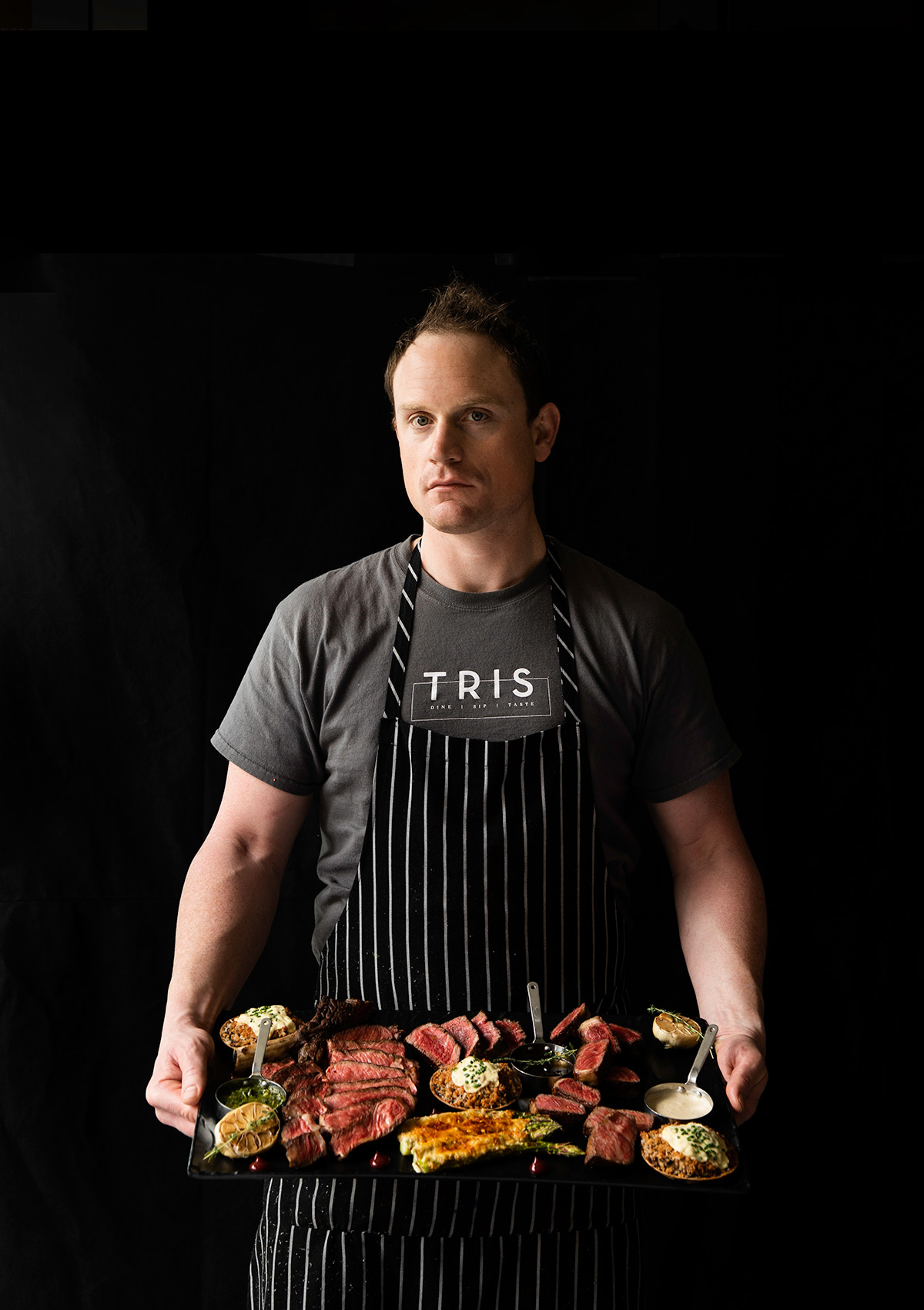 In 2018, the Hubbell & Hudson Bistro concept transitioned into ‘TRIS’ to elevate the dining scene in The Woodlands’ Waterway square. Named after his beloved daughter, everyone from his team to restaurant guests is treated like family. Offering an explementary dining experience, Chef Simmons’ menu combines worldly flavors from his extensive travels with classic culinary techniques, paired with re-envisioned classic cocktails, select craft beer, and ever-evolving new and old-world varietals. Sharing space with TRIS is Chef Summons’ passion project, Cureight, a luxurious eight-course tasting menu concept that changes weekly and is paired with hand-selected wines.

Simmons pushed the culinary envelope in The Woodlands ever since his move down to this suburban destination, North of Houston. In 2018, Simmons was nominated by Eater Houston as “Chef of the Year,” recognized as one of CultureMap Houston’s top 10 chefs of the year and placed in the top 25 in Houston Chronicle’s top 100 restaurants, curated by James Beard award-winning journalist Alison Cook. Simmons was declared the “Truffle Master” with his truffled grilled cheese in 2018, and also earned the ‘People’s Choice award for his oyster and truffle potage in 2017 at the annual Truffle Masters competition.

Simmons accolades continued in 2019 by being recognized in the top 10 of CultureMap Houston’s inaugural top 100 restaurants list, named “chef to watch” by Houstonia Magazine, and placed in the top 20 of Houston Chronicle’s top 100 restaurants, to name a few. Simmons was also selected to participate in the Butcher’s Ball Golden Cleaver competition where he took home third place against 20 other prestigious Texas chefs.

In January 2020, Houston Press named Chef Austin Simmons, ‘Best Chef’ in Houston. 2020 has been unconventional for everybody in the world, including Chef Austin Simmons. He was invited to cook at the world-renowned JamesBeard House in New York City, which got cancelled back in March. Chef Austin has been active in the community, trying to revive his concepts during the Covid-19 Pandemic, and has taken additional executive responsibilities for the Hubbell & Hudson Management Group for its Black Walnut Cafe concept.

In addition to cooking, Simmons’ passion is to develop younger chefs to discover their own talents in the same way that he was encouraged.